Posted by Yusuf Jamasali at 4:39 AM No comments:

On the Reality of Death

It's a real good experience to taste the full buffet of life... To learn science and technology, and all other fields of domain where the human intellect and obsession can reach. Today, I'd like to share with you a meal on spirituality. Specifically, on the reality of death. So here it goes.

The Clever King
There was a country long time ago where the people would change a king every year. The person who would become the king had to agree to a contract that he would be sent to an island after his one year of being a king.
One king finished his term and it was time for him to go to the island and live there. The people dressed him up in expensive clothes and put him on an elephant and took him around the cities to say goodbye to all the people. This was the moment of sadness for all the kings who ruled for one year. After saying farewell, the people took the king with a boat to the remote island and left him there.
On their way back, they discovered a ship that had sunk just recently. They saw a young man who survived by holding on to a floating piece of wood. As they needed a new king, they picked up the young man and took him to their country. They requested him to be a king for a year. First he refused but later he agreed to be a king. People told him about all the rules and regulations and that how he will be sent to an island after one year.
After three (3) days of being a king, he asked the ministers if they could show him the island where all the other kings were sent. They agreed and took him to the island. The island was covered with thick jungles and sounds of vicious animals were heard coming out of them. The king went little bit inside to check. Soon he discovered the dead bodies of all the past kings. He understood that as soon as they were left in the island, the animals came and killed them.
The king went back to the country and collected 100 strong workers. He took them to the island and instructed them to clean the jungle, remove all the deadly animals and cut down all the excess trees. He would visit the island every month to see how the work was progressing. In the first month, all the animals were removed and many trees were cut down. In the second month, the whole island was cleaned out. The king then told the workers to plant gardens in various parts of the island. He also took with himself useful animals like chickens, ducks, birds, goats, cows etc. In the third month, he ordered 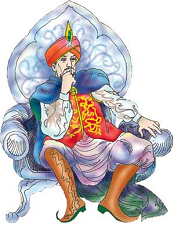 the workers to build big houses and docking stations for ships. Over the months, the island turned into a beautiful place.
The young king would wear simple clothes and spend very little from his earnings as a king. He sent all the earnings to the island for storage. When nine (9) months passed like this, the king called the ministers and told them:
“I know that I have to go the island after one year, but I would like to go there right now.” But the ministers didn’t agree to this and said that he has to wait for another three (3) months to complete the year.
Three months passed and now it was a full year. The people dressed up the young king and put him on an elephant to take him around the country to say goodbye to others. However, this king is unusually happy to leave the kingdom.
People asked him, “All the other kings would cry at this moment and why are you laughing?”
He replied, “Don’t you know what the wise people say? They say that when you came to this world as a baby, you were crying and everyone was smiling. Live such a life that when you are dying, you will be smiling and everyone around you will be crying. I have lived that life. While all the other kings were lost into the luxuries of the kingdom, I always thought about the future and planned for it. I turned the deadly island into a beautiful abode for me where I can stay peacefully.”
References:
Death: a beautiful gift for a believer
Posted by Yusuf Jamasali at 9:43 PM 2 comments:

What is "real"? How do you define "real"?
"If we are talking of what you can feel, smell, taste and touch, then "real" is simply electrical signal interpreted by your brain." said Morpheus to Neo in one of the best celebrated 1999-film "the Matrix."
Posted by Yusuf Jamasali at 3:28 PM No comments:

Please vote for me